Time and time again, companies’ yearning desire to be the best gives way to fierce rivalries.

For some rival companies, the feud is public-facing – think comparative advertisements and competitor comparison landing pages. For others, the goal is to keep the rivalry quiet, minimizing association between brand names and focusing efforts on promoting their own strengths. Whichever competitive strategy your enterprise takes, I’m sure you agree that rising to and staying at the top is a consistent uphill battle.

We’ll provide overviews of these rivals and explore how they’ve positioned themselves to differentiate and maintain competitiveness. You’ll walk away with lessons that are helpful for your own competitive strategy.

Brief overview: Consumers purchase a yearly membership and have access to a warehouse filled to the brim with bulk grocery and home items at discounted prices. Each membership comes with access to the company’s reduced-priced gas stations, pharmacies, photo centers, and credit cards. These companies’ value proposition is that the considerable cost savings experienced in-store are more than enough to cover membership fees.

So, here’s the burning question – how do these companies differentiate when they’re doing... the same thing? The simple answer is that Costco has made significant strides to expand while BJ’s narrowed its focus to gain loyalty within its current customer base.

Back in 2013, Costco differentiated itself by opening international warehouses. While this led to increased sales for them, BJ’s capitalized on this, focusing expansion and marketing initiatives strictly towards those on the East Coast of the United States. In addition, Costco grew its organic food selection to expand and bring in new consumers while BJ’s focused on improving customer experience, implementing self-checkout, having the longest hours of operation, and accepting outside manufacturer coupons (the only wholesale club on the market that does so).

Food for thought: Growth doesn’t always equate to acquiring more customers. How can you provide additional value to your current customer base to make your product or service stick that much more?

Now, here’s some “beef” we’re all familiar with. The infamous burger war – the Big Mac vs. the Whopper.

Brief overview: Both founded in the 1950s as hamburger restaurants, these companies have risen to the top due to low menu prices coupled with a convenience model (drive-thru, counter service, and most recently, delivery). Since their inception, the majority of locations have been privately owned franchises and both menus are filled with practically the same fast food items.

This rivalry has been brewing for over 50 years, and to this day, these companies continue to go head-to-head publicly – pulling out all the stops, including attack advertising. For some perspective, check out this competitive comparison advertisement from Burger King. 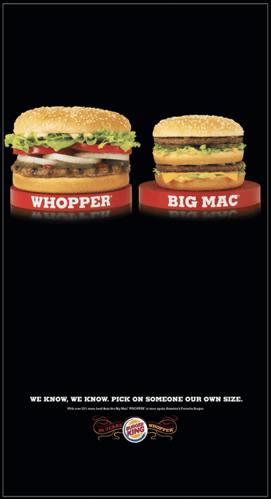 The ad echoes Burger King’s believed differentiator – its burgers. While McDonald’s prides itself on cheap prices and its number one revenue spot for burgers, Burger King made a strategic decision early on to focus on the quality (and size) of its burgers. It all started back in 1968 when McDonald’s had a serious price advantage by selling each burger for 15 cents. Because profit margins would likely be too small, Burger King pivoted by selling a bigger burger at 37 cents. While prices have obviously inflated since, Burger King has accepted its price difference.

Also, notice in the advertisement the vibrant veggies bursting out of the Whopper. While McDonald’s is known for cheap pricing, they’re also known for extremely unhealthy fried food. Thus, Burger King created the Impossible Burger, a flame-grilled patty made from plants, to further differentiate itself (not to mention the recent opening of its first fully veggie restaurant).

As of October 2021, the McPlant (a plant-based burger) is coming to eight U.S. McDonald’s franchises. I have a feeling that the meatless burger war is on the horizon.

Food for thought: Pinpoint your competitors’ weaknesses and don’t be afraid to capitalize on them. If the weakness is already publicly-known, reiterating the flaw through strategic marketing initiatives and campaigns can help put you at the top.

The true battle of technology: PC vs. Mac, Windows vs. macOS, iPad vs. Surface, iPhone vs. Windows Mobile – you get the point. It’s (debatably) the biggest technology rivalry of all time.

Brief overview: Established in the 1970s, these longtime rivals both pushed out the first home computers known to man in the 1980s and saw widespread adoption. These rivals have shaped the way consumers use technology in their daily lives and have dominated the consumer technology market from day one.

As computer sales skyrocketed post-launch, the rival companies knew that they needed to differentiate and expand their product offerings to thrive. Apple had already captured the attention of many consumers and decided to capitalize on this visibility by bringing innovative, new products to market such as iPhones and iPods (with seamless integration features).

In the meantime, Microsoft sales were rising due to its licensing of software such as Windows and Office Suite, but the company knew it had to offer more to stay at the top long-term. To compete, Microsoft released a plethora of devices outside of computers... just like Apple (i.e. the infamous Xbox). They also saw the high prices of Apple devices and used that as a competitive advantage for them throughout marketing campaigns. Check out the ad below. 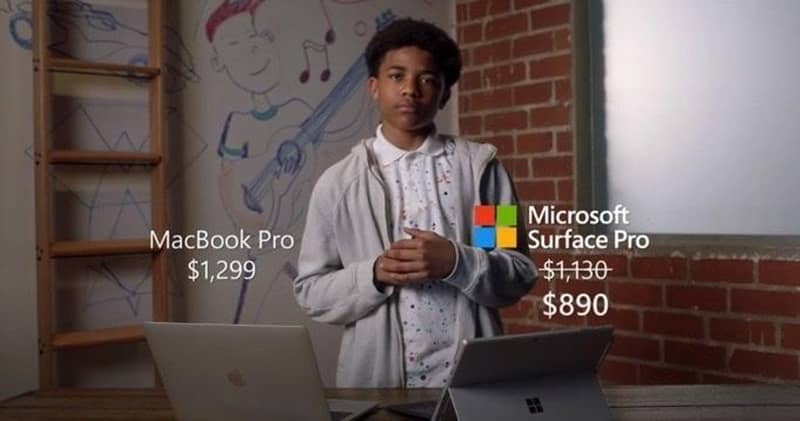 Food for thought: Sometimes, playing it safe isn't an option and you've got to step outside the comfort zone of your core offering to remain competitive. Provided that your core offering has been strong enough to make your brand trustworthy, what are some bold, unexpected moves you could make?

Brief overview: These rival companies were established in the timeframe of the early 2000s with the same goal to provide email marketing services to small businesses. While Mailchimp and Constant Contact weren’t the first email software companies on the market, the existing companies targeted large corporations and had high price tags. Seeing a need in the market, these rival companies were born to simplify marketing for businesses, enabling them to grow and increase sales and leads.

With a similar value proposition and target audience, Mailchimp pivoted by offering a free, basic membership plan to get users hooked while ensuring that all pricing tiers across the board were cheaper than Constant Contact. Mailchimp also positioned its strategy to offer more data, real-time reporting fields, and automated capabilities – a component Constant Contact falls behind on.

While Mailchimp offers automation for all pricing plans, Constant Contact only offers automated capabilities (i.e. auto-responses or triggered emails) for the most expensive package. So, for Mailchimp’s target audience of small businesses, they have a clear competitive advantage for those with lower budgets. In fact, the rivalry has grown so fierce that Mailchimp even has a competitive comparison landing page on its website. Here’s a sneak preview of it. 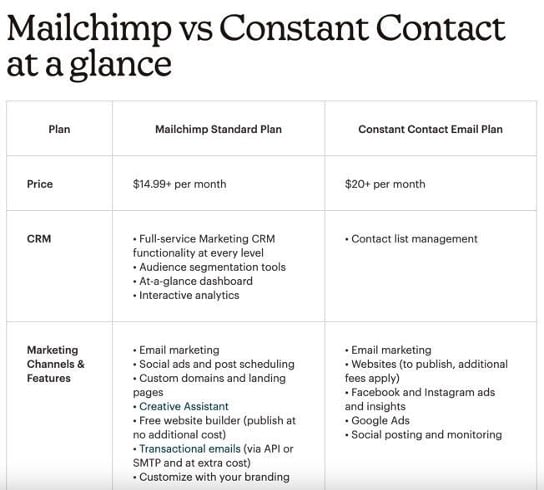 Food for thought: If you work for a B2B software company, chances are your competitor's customers are broadcasting their weaknesses and shortcomings on review sites like G2. How might you synthesize this information with your product team's roadmap to strengthen and differentiate your offerings?

Beat out rival companies with Crayon

According to our 2021 State of Competitive Intelligence Report, 53% of businesses say the majority of their sales deals are competitive. Whether you’re dominating your market or worried that you’re falling behind, Crayon’s free competitive landscape report has you covered, providing you with a better grasp of how you stack up and where you can go from here.