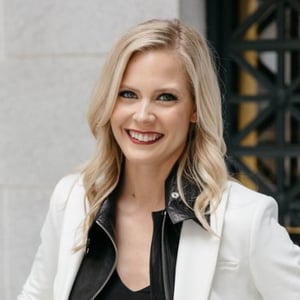 Crayon's Product Marketing Spotlight is an interview series where we chat with product marketers to get a glimpse into their careers and gain unique insight into product marketing strategy. In this edition of Product Marketing Spotlight Series, we shine the light on Brianne Kimmel, an Angel Investor and Advisor based in San Francisco. Business Insider recently named Brianne a top angel investor that every startup should know alongside Ellen Pao and Cyan Bannister.

ED: What is your role?

BK: Currently, I’m a startup investor focused on the future of work. This includes business software and workplace productivity tools like Slack, Zoom, and Notion. It also includes new communities, services, and experiences that impact your professional life. Some of my recent investments in this area have been Dev.to, Girlboss, LunchClub, and Humble Dot.

In addition to being an investor, I also run an invite-only program called SaaS School for early stage companies to learn from executives Airtable, Notion, Superhuman and more.

ED: Where does your investment firm focus?

BK: I help startups with go-to-market strategy. For early-stage startups, this means getting involved with early customer development. A question I get asked a lot, specifically with software businesses is,

Should the company start with a fairly focused entry strategy, selling to a particular person or team? Or should they sell broadly across an entire company?

A lot of investors will ask about TAM (total addressable market), but I find a company’s TAM is always much larger than they expect.

It’s best to find an early wedge into a much broader market and continuously expand.

I also spend a lot of time helping startups find non-linear growth. I focus a lot more on the self-serve model. So, focusing on how product and engineering can grow your business without any sales reps. That works really well for a product like Dropbox or like Slack, where the product gets better the more people are using their product. But, even these companies have sales teams. So, I help these companies figure out when they should hire their first sales rep, how should they think about inbound sales, such as using SDRs and AEs.

ED: Tell me a little bit about your career path. What was your first job, and what else happened along the way to bring you to where you are now?

BK: I started out in Performance Marketing at Expedia, which turned into a Head of Social Media role. Under that new role, it included Performance Marketing, all paid social campaigns, website retargeting, brand and community engagement, and product marketing. While at Expedia, I was also very involved in building out internal tools. So, I spent a lot of time with SaaS companies that were building out user-generated content platforms, and SaaS companies that were customer support platforms that could support the high-level of social media interactions that we had. Given that we were Expedia, we had a lot of engaged members on the community side, but also had to handle complaints whenever a customer experienced an unexpected change to their travel.

I was doing a mix of both Consumer and B2B work. I worked on the Expedia Media Solutions business, where we worked on online partnerships with companies like Tinder - we did a really fun campaign called “Match Made in Travel.” I got to spend a lot of time with early-stage companies as they were taking off.

Then, I decided to start teaching at General Assembly. I started off by teaching Product Marketing courses on evenings and weekends. Doing that was super beneficial to my career because not only was I doing my full-time job at Expedia, I was also forcing myself to learn new things through teaching. It was a fun way, early in my career, to meet new people and connect with early-stage startups, and it was a great way to push myself to keep learning new things. I taught over 5,000 students across different campuses, including Sydney, San Francisco, and Seattle.

After about 4.5 years, I decided to make the switch from Expedia to Zendesk. I became extremely interested in software, and during my time at Expedia, we went from one product to seven products, so my platform experience from that role was really relevant because I was used to working across a number of different product lines. We would cross-sell a lot at Expedia - sell a flight and a hotel or a car rental, which is the same as what we would do at Zendesk. We would cross-sell customer support and help center software, and we’d cross-sell our live chat and more robust analytics. A lot of what I learned at Expedia really worked well at Zendesk.

While I was at Zendesk, I worked on two core programs. I worked on our technology integration, the Zendesk apps marketplace, which at the time had over 650 partner applications. So, I got to work with Slack, Microsoft Teams, and Dropbox. Which was great, because I was able to really figure out how our product worked well with partners, and how we could use that to sell Zendesk to more Enterprise buyers. I worked really closely with Microsoft on the launch of Microsoft Teams, and that was a way for us to really evaluate how Zendesk connects with other types of software, and how we use that to sell into their user base.

I also built a program called Zendesk for Startups. Zendesk for Startups was the ability to give free software to early-stage companies, which did two things. It helped us defend against new competitors and stay engaged with early-stage companies. It also was a great way for us to engage with some of our most interesting and innovative customers. During that time, I spent a lot of time working with the customer support teams at Peloton and Allbirds, and the goal was to really understand how they’re using customer support to build relationships with customers, and how they’re using it as more of a brand channel rather than a complaints channel. It was a nice way for us to give back to early-stage startups and spend time with their teams as they grow.

I had been angel investing on the side, and decided to take it full-time. Today, I’m an investor in over 20 startups including workplace collaboration tools, professional networks and developer education.

I’m involved with Girlboss and I’ve also recently invested in a new company called LunchClub which uses AI and ML to match people new for lunch, kind of like a Chat Roulette, but it’s using AI and ML, where they learn about you through your contacts, and they match you with people you haven’t met yet.

BK: The best advice was from one of my mentors and advisors. She had encouraged me to basically think in five-year increments. So, the decisions we make today need to set us up for the next five years, and what we build today will impact where we are in the future. I was told to focus on activities that compound over time, for example, don’t stop after one blog post, write 10, and then evaluate.

ED: What skills do you think are valuable to set people up for career success?

BK: Quantitative skills are highly transferable: measurement, reporting, and deep analysis are things that set you up for any future position. Something that a mentor told me is that if you just always work a little bit harder, you’re usually working a lot harder than other people. That extra thirty minutes of hard, focused work, can make a long term impact on your career.

ED: What is something you wish you knew earlier in your career?

BK: Early career is interesting because college is a very tried and true formula - you go to classes, you take an exam, you have an internship. The transition from college to early career can be challenging and what I wish is that earlier on I would have transitioned from purely learning to more experimentation. We often play things safe because that’s what we’re taught in college. But, early on is when you can be more experimental and you can actually try things, fail, and still be okay.

ED: What programs or resources have you found to be most impactful throughout your career?

BK: Find different types of mentors, both professional and personal. I call this my personal board of directors, which includes people with very different backgrounds and experiences.

Find ways to cultivate curiosity, blur the lines between personal and professional interests. Masterclass is a good example where topics like screenwriting can be extremely valuable if you aspire to speak at a conference or launch your own YouTube channel. Find ways to learn from people who’ve done it before: podcasts are a great example to learn from experts. Rather than learning from a textbook, you can learn really interesting insights from experts who have actually done it before.

ED: Why do you think it’s important for companies of all sizes to focus on their competitors?

BK: This is a little bit controversial. When I first joined Zendesk, their position was to never talk about the competition. The reason for this is that historically, early-stage companies often have an emphasis on building, and building without any constraints. If you want to reimagine the world, it doesn't make much sense to focus on the competition because it doesn't make sense to build in a way where you’re playing defense rather than offense - which I agree with. But what’s interesting is that there is a new wave of companies who are able to move quickly, and are able to be successful because they understand a gap in the current competitive landscape or they have a unique insight that makes their product a better user experience than what's currently available on the market. It’s important to understand how your product adds value in a relevant way, and how your product fits into a broader ecosystem as well - this is important for all B2B companies. You need to understand where your product fits into your market’s view of the world.

Startups can’t afford to ignore competition, I help early-stage companies identify their competitive advantage and move faster than the competition (essay on this).

ED: What do you think holds companies back from growth?

BK: I think there are a lot of times when companies are seeing meaningful traction from a particular channel or program, and tend to over-optimize for what’s working, and miss out on new ways to unlock additional revenue. Companies will really focus a lot on self-serve and efficient channels but one of the risks they run long term is they don’t go enterprise fast enough, and they miss out on additional value that can only come from those enterprise companies.

BK: Recently, I read Bowling Alone: The Collapse and Revival of American Community. It talks about how America has changed over time, how we socialize, and how we think about our families. It talks a lot about social constructs at work. It helped me a lot because I could think about, how has the world that we live in changed over time, and what would it look like for us to recreate communities online?

Emily Dumas
Emily Dumas is a product marketer who leads content strategy at ZoomInfo, a global leader in modern go-to-market software, data, and intelligence. Prior to joining ZoomInfo, she spent several years on the Crayon marketing team.
LinkedIn

The latest benchmarks and best practices in the CI field, based on the industry's largest and longest-running survey.