Penetration Pricing: What It Is, What It Isn't, and How It's Executed In the Real World

Your product team has spent the last 18 months cookin’ up something shiny. Prospects are going to love it.

There’s just one problem: You’re entering a saturated market. There’s the old guard. The scrappy upstarts. How do you capture market share at this critical juncture?

In this post—which expands on the material from our previous competitive pricing post—we’ll run through a conceptual overview of penetration pricing, take a quick detour through two of its cousins (loss leader and predatory pricing), and then take a deep dive into a real-world example of penetration pricing in action.

What is penetration pricing?

Penetration pricing isn’t for everyone. It really only makes sense when:

The basic premise is that you enter the market with a product priced lower than the current offerings, sacrificing margin in the name of rapid customer acquisition. In launching with a price that falls below what customers expect, you can drive a greater number of sales in less time than you would if you went to market priced “fairly.”

Now, the trick is that penetration pricing isn’t—or, at least, shouldn’t be—permanent. Once your brand is established and discerning customers are flocking to your offering, you increase prices or embark on an upsell campaign in an effort to normalize revenue.

But it isn’t all roses. Penetration pricing has a habit of attracting tire-kickers, the kinds of customers who chase the best deal; there’s also a chance that a low price may signal a lack of quality versus market-rate products. If you don’t use the window of rampant customer acquisition to cultivate loyalty through product performance and brand value, you can rest assured many will leave once your prices increase or a new competitor comes to the table using the same tactic.

What makes penetration pricing so unique?

If you squint, penetration pricing can look a lot like two other, more pernicious models: loss leader and predatory pricing. The biggest difference is that these are either probably or definitely illegal, depending on the state/country in which you live. Let’s dig in.

Loss leader pricing looks very similar to penetration pricing: It involves sacrificing margin in an effort to draw customers in. That, however, is where the similarities end. Customers come to a store or visit a website with the intention of purchasing the loss leaders, then spend more money on products with better margins: products they wouldn’t have purchased without having first taken advantage of that incredible deal.

In the early aughts, stores like Wal-Mart used DVDs in this exact way. Customers would come into the store to buy that fresh new season of Buffy the Vampire Slayer for $18.99; the studios made bank, and Wal-Mart didn’t make a cent. But then, on their way to the register, the customers would notice the snacks and new TV and shovel they had been meaning to buy. Suddenly, not making a dime on that DVD wasn’t so bad.

Please note: While it can be incredibly effective, particularly for DTC retailers, loss leader pricing is illegal in some states and European countries.

It’s the term for a company undercutting the market in order to eliminate competition. This is exceptionally difficult to pull off; you need a sizable toolkit to effectively eliminate any semblance of margin until your competitive landscape is nothing but tumbleweeds.

And it’s illegal across the country.

Why? It’s in violation of antitrust laws, regulations that exist to perpetuate a “fair” market. The end goal of predatory pricing is to drive competitors out of business, thus creating a monopoly. At this point, the moral fiber-less robber barons jack prices as high as they want.

So, don’t employ predatory pricing: You’re better than that.

In my old building, we had three options when it came to internet service providers: Comcast, RCN, and Starry. You’re probably familiar with the former; the latter is a scrappy upstart leveraging penetration pricing to win customers (and great product paired with outstanding service to keep them).

Cable companies offering low introductory rates and free HBO subs or obscure sports packages to lure new customers is as certain as death and taxes. Then, after 12 months, you can’t stream two movies and a Zoom meeting simultaneously, but your monthly bill inexplicably triples. If there are no alternatives, you suck it up. If you’re lucky enough to live in an area saturated with ISPs, maybe you hop to a different introductory offer, only to be rug-pulled in another year.

Starry takes a different approach, effectively leveraging penetration pricing thanks to a combination of viral adoption, economies of scale, as-good-as product, and service that builds brand loyalty. Let’s dig into each of those.

Generally speaking, customers have a hate-hate relationship with their ISP. Most are looking to make a change, but options are limited. So when one comes around offering lower prices, many of us are willing to make the change. As if coming to the table with internet access for $50 a month wasn’t enough to get disloyal customers to make the switch, Starry sweetens the pot: 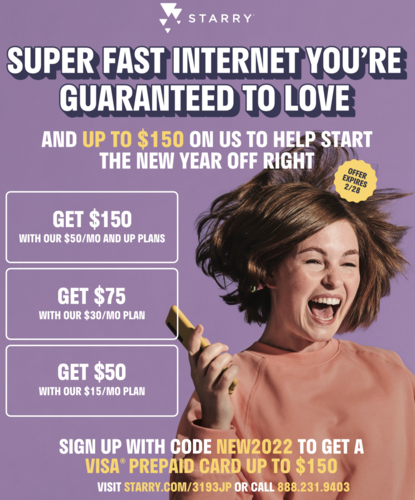 Not only are the prices 50-75% less than your average Comcast bill, they’ll pay you to switch. This was the flyer posted all over the lobby of my building. Dinner and a movie? Sign me up.

How do you sell internet access for $15 or $30 or $50 per month without running your business into the ground? Economies of scale, baby!

Starry doesn’t dig up streets or hang cables from overtaxed telephone poles; they use a system of easy-installed beacons.

A large beacon is placed at a high point in a neighborhood, smaller receivers are appended to buildings, and customers use routers to tap into their sweet, affordable internet. Once the “Titan” is dropped into a neighborhood, any building can become a hive of customers. But without that component in place, they won’t install. Why? Because they have no way to make money using their penetration pricing model without a high rate of customer adoption.

Penetration pricing can create negative brand perception. There’s a fine line between a good product that costs less and the cheap, low-quality alternative.

To avoid this, your product needs to be good—if not great. Returning to our Starry example, they’ve got this on lock:

Not only does having a killer product help eliminate negative sentiment related to pricing, it’s also essential in building customer loyalty, which you’ll need when:

Putting it all together

Penetration pricing is an effective means of market disruption for fledgling brands. It can be a boon for a new product breaking into a competitive market. It’s what allowed Starry to break into nearly five million households in four years and SPAC their way to $1.7 billion.

But it certainly isn’t for everyone.

Can you lower your prices and gobble up market share for a time? Sure. But without a product that can weather the subsequent price increase and assaults from competitors, all you’ll really have managed is overspending on CAC and sacrificing too much margin, fast-tracking your own demise.

TL;DR: Make sure you understand how penetration pricing will impact your business before implementation.