When it comes to launching a new product, sales and marketing for that product can be extensive. Not to mention, you have to worry about the new product launch being a flop, as many do. But what if you can look at brands that nailed it in the product launch arena? Would you be more confident about introducing your new product to the world then? Let's find out.

Acura launched their TLX range of cars in 2017. With the new launch, they started the #TLXExperience campaign and invited influencers in the automotive industry to drive an Acura TLX car around the Canadian Tire Motorsport Race Track. The influencers who participated in the campaign shared their TLX experiences with their fans through blog and social media posts. The campaign resulted in approximately 3,000,000 impressions on day one in Canada alone, $524,200 in earned media, and converted influencers to Acura customers.

Main takeaway: Working with influencers in your industry can boost the effectiveness of your product launch because they have significant reach and impact in your target market, which can build trust with your product and brand. By giving them an exclusive preview of your product, or sending them some product samples. As they share their honest reviews of, and experiences with your product, you are getting exposure to not only your product, but your brand as well. After all, research suggests that up to 90% of consumers read online reviews. And 59% base their purchase decisions on recommendations from the people they know and trust – like friends, family members, and the people they follow online.

In 2016, Planview launched a portfolio management platform called Insight Analytics. The company wanted to provide solutions for IT and product development organizations so that they can more easily synchronize top-down planning with bottom-up execution.

To give their customers an insider's peek of their newest product, Planview created a marketing campaign that would drive recipients to participate in a webinar and/or product demo. They wanted to meet an aggressive timeline for development, implementation, and launch. To do this, the company segmented their customer database into three groups to allow for more targeted messaging:  C-level executives, Product Sponsors– directors and managers, and hands-on product users.

The Planview Insight Analytics launch campaign achieved response rates much higher than expected in all three of the targeted groups. with the group consisting of C-level executives exceeding the anticipated response rate by 13%, more than tripling anticipated industry standard rates.

Main takeaway: Segmenting your target audience into groups based on characteristics they have in common can help you improve your product by meeting the needs and preferences of a specific audience. Segmenting is especially beneficial during your product launch as different groups of people care about different things, which means that you can design your product and messaging in a way that appeals to multiple audiences.

In 2012, Mondelēz International, a multinational company that sells confectionery and other food products, launched two new products in Brazil: Trident Unlimited and belVita. To effectively market these products, they started promoting them on YouTube TrueView, which allows advertisers to only pay when someone chooses to watch their video ad.

After launching the video ad campaign, the company used Google's Brand Watch to measure the campaign's performance and to see how their target audience responded to their video and display campaigns. After analyzing the campaign's performance, Mondelēz learned that viewer retention dropped considerably after the first five seconds. They revised the ad by mentioning their brand name within these five seconds and displayed the product on the screen.

As a result, their view rate increased by 15% and brand awareness increased by 27%. The brand was also able to narrow down their target audience to a specific age group, as they had a 79% brand recall with people aged between 35 and 44.

Main takeaway: Don’t go into a product launch expecting that launch day is the finish line. Monitoring performance of campaign assets - and adjusting those assets to be more effective mid-launch is critical to maximizing the impact of the launch.

In 2014, Front App was officially launched after several months of beta testing. FrontApp a team management app that allows business owners and executives to communicate with their team members and manage their tasks seamlessly. In addition to their PR outreach, the company posted about their new product on three well-known websites that promote new software tools: Hacker News, Product Hunt, and TechCrunch. Each site drove significant traffic and engagement, including conversions, qualified leads, and shares from featuring the product.

Main takeaway: If you want to attract leads and drive conversions for your product launch, guest posting on reputable sites is a great way to raise awareness about your product. You don’t need to solely rely on others to write about your launch - you can submit guest posts and list your product on new app sites to get more visibility. This is especially beneficial because you're promoting your product through trusted platforms as well as connecting with a massive audience relevant to your industry.

In 2012, Barclays, a British multinational investment bank and financial services company, launched their mobile app Pingit. Pingit is a mobile payment service that allows users to easily transfer money through their mobile phones. Using the service, consumers can transfer money to other people using only their phone numbers. Barclays gained lots of social media buzz as a result of their big launch. The company took advantage of this exposure by getting real-time user feedback.

The majority of the feedback was positive, but the company did receive some negative responses. As they looked at the feedback, Barclays realized that the main issue with the app was that it was only available for people aged 18 and above. This caused teens to feel left out and frustrated many parents who wanted to use Pingit to send money to their kids.

With the help of social media feedback and response, Barclays was able to turn a possible PR disaster into something positive. The company quickly responded by making their app available for users 16 years and older. Not only was Barclays able to fix a key issue with their product using social media feedback, they were also able to see what they were doing right. They learned that people were really enjoying the balance checking feature and even developed a new app just for this.

Main takeaway: When launching your product, social media monitoring is a great way to gain feedback about your product. This allows you to get a clear idea of what you're doing right or wrong, which shows you the possible changes you can make to satisfy your target audience.

Successful product launches require effective upfront planning, and learning from successful campaigns can provide best practices to incorporate into your launch plans. Segmenting your audience, working with influencers, posting on well-known websites, and monitoring campaign performance to respond to feedback or adjust your campaign are all great approaches to set up your launch for success. 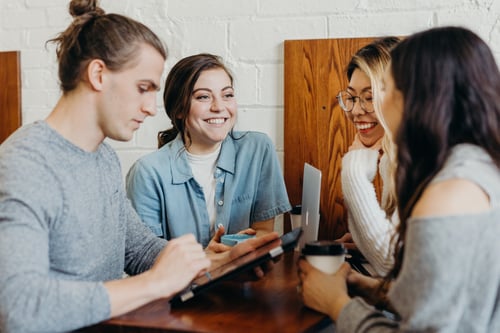 A Guide to Product Marketing Team Structure and Functions

END_OF_DOCUMENT_TOKEN_TO_BE_REPLACED

Hiring the perfect product marketer with the right combination of skills for your organization is no easy feat. In a recent blog post, we discussed what product marketing actually is. Although...

END_OF_DOCUMENT_TOKEN_TO_BE_REPLACED

Ask one hundred companies what a product marketer does, and you’re likely to get one hundred different descriptions. Product marketing is one of those roles that varies so much from industry to...