What is the Future of Competitive Intelligence?

Crayon’s annual State of Competitive Intelligence report surveyed 1,000+ CI professionals to gain a better understanding of best practices, challenges, and strategies, and to get an inside look at how the industry is growing year over year. Let’s dive in and look at trends over the past few years, and explore where the future of competitive intelligence is heading. 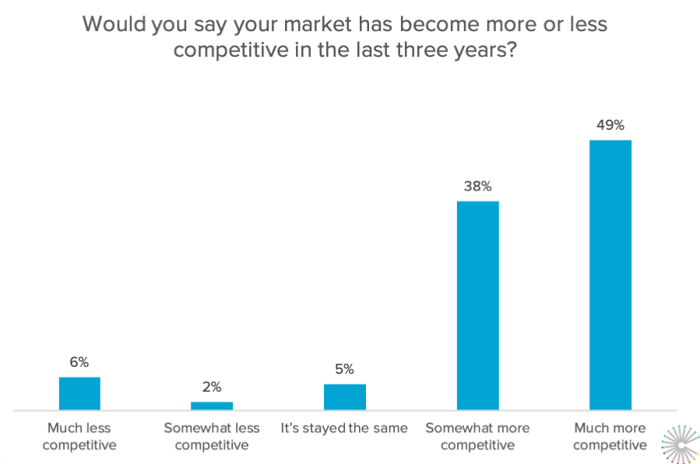 Simply put, we see this level of competition continuing to increase. If you think back about 10 years, industries weren’t as crowded, and available competitive intelligence data was less robust than today. If we think about the number of new companies emerging every day, we know that every market will continue to become even more competitive 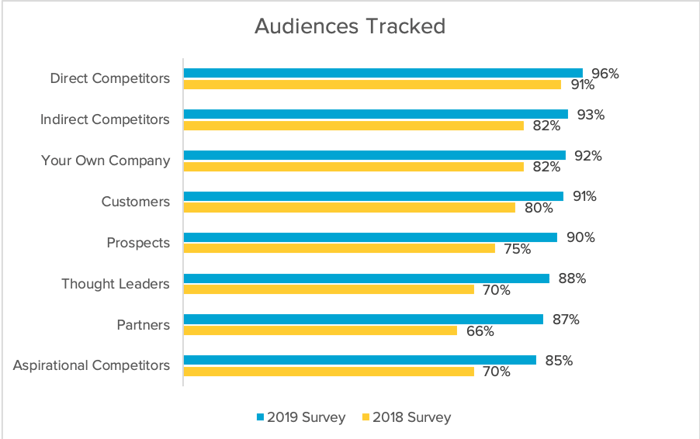 As competitive intelligence continues to become an integral part of every business’ strategy, the table stakes approach will expand beyond “competitor tracking.” While our survey found that the majority of respondents are already tracking beyond their direct competitors, this focus on other audiences continues to increase. As more audiences are tracked, the amount of data collected by CI professionals will continue to grow, and with more data comes a need for more resources to accurately analyze and act upon the influx of data. Which brings us to our next observation.

People are Investing More in CI 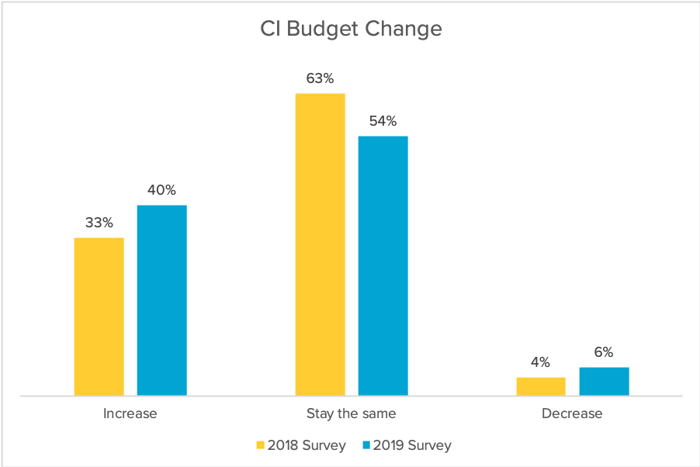 Over the next few years, we will see the budget for CI increasing steadily. Companies are, more and more, seeing the value of both dedicated CI professionals and full competitive intelligence teams. As the ROI of competitive intelligence initiatives continue to grow, we will see bigger investments in both budget and headcount across every organization.

Time Spent on the Research Phase is Decreasing

We asked survey respondents how much time they spend on each phase of competitive intelligence: Research, Analysis, and Communication. Between 2018 and 2019, we saw some of the time spent on research shift to time spent on communication, resulting in a more even split across the three phases of CI. With the rise of automation, research can take up less time and more time can be spent on analyzing and acting on findings. 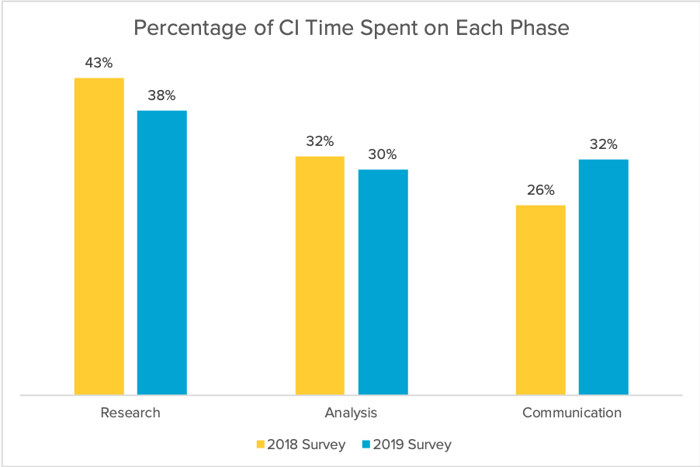 Frequency of Updates are Increasing

As we noted in the previous section, some of the time dedicated towards CI research time is shifting to an increased focus on communication. Now more than ever, businesses are seeing the value in consistent communication of competitive intelligence data. With that, comes more updates of collateral and CI resources. Although many people reported that they currently update intel monthly, quarterly, or as needed, we saw a rise in those who wish they updated their CI materials on a more frequent basis: weekly. With more time analyzing and communicating intel, CI professionals want to ensure that they have the most up-to-date information to share with their teams. 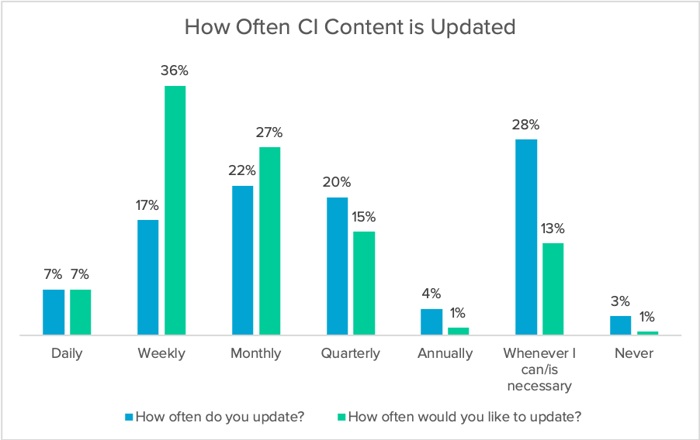 As we continue to have more intel to share, and more information constantly at our fingertips, CI professionals are going to be updating CI resources and sharing it out more frequently. Having the most up-to-date and robust competitive intelligence materials will help your sales team close more deals, and help your company maintain its competitive advantage.

As we inch toward the second half of 2019 and maybe even begin planning our strategies for the beginning of 2020, we want to make sure to keep up with the changing industry of competitive intelligence. Set yourself up for success based on the trends found in the 2019 State of Competitive Intelligence report: automate CI research by leveraging AI platforms, complete market tracking beyond direct competitors, update your CI budget to support your program goals, keep your intel up-to-date at all times, and communicate it frequently. If you start re-designing your competitive intelligence plan now, you’ll be prepared to take advantage of these CI trends. 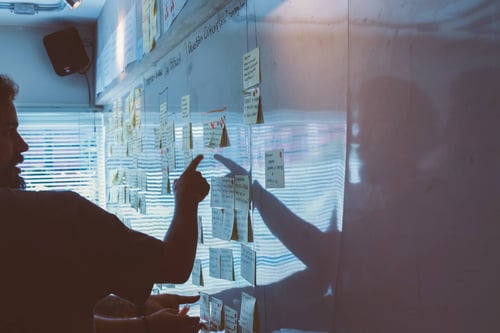 What Are the Goals of Competitive Intelligence? Let’s Break Down 5 of Them

Businesses have never been more agile than they are right now. Bringing a product to market, releasing a new feature, launching an ad campaign — these initiatives, though they will never be easy by...

END_OF_DOCUMENT_TOKEN_TO_BE_REPLACED 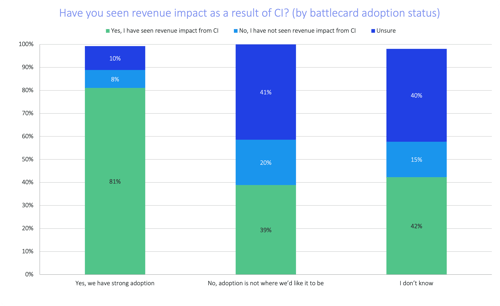 If I had to summarize the brand new 2021 State of Competitive Intelligence Report with a single word, I’d use the word revenue. Now more than ever, companies are growing their revenue by tracking,...

END_OF_DOCUMENT_TOKEN_TO_BE_REPLACED 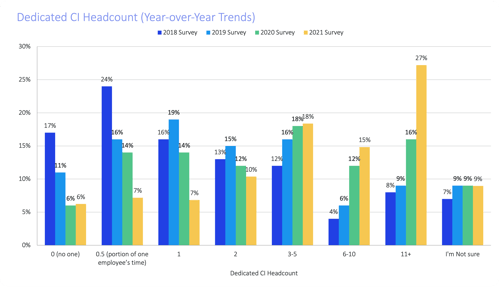 NEW DATA: 70% of Businesses Have CI Teams of 2 or More Dedicated Professionals 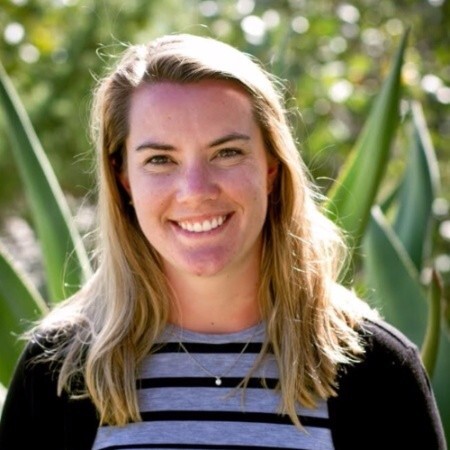 As the folks here at Crayon combed through the results of our 2021 State of Competitive Intelligence Report, an exciting theme jumped out at us: Competitive intelligence (CI) programs are growing,...